Here's a tip, if you're into year 6 of cyber-stalking someone: Flatter them. Attribute grandiose titles to them, such as an "International Reputation".

If you don't flatter your mark, they might lose interest and stop responding. And that would be unbearable. You don't want to go back to lighting all those fires and cutting yourself again.

On this forum alone, we have seen Eric Allen Bell maintain for weeks that the irregularities on his LInkedIn, and IMDb pages were inconsequential glitches caused by someone else, and that I was insane for bringing this up.

But, we have also seen that after Bell Media of CANADA, LinkedIn, and IMDb were contacted about what Eric Allen Bell was doing, it all got rectified overnight.

Yes, he has an international reputation as a liar, and fraud.

And, calling me "insane" is not the way forward.

Quote
The Jewish Chronicle
A think-tank has threatened to sue Google,Yahoo and Twitter for hosting content that promotes Holocaust denial and virulent antisemitism

The Lawfare Project, a civil rights litigation fund which aims to pursue to antisemitic discrimination around the world, said the internet giants could face legal action for failing to address the problem in their search results.[www.thejc.com]

This is a threat to free speech, according to Eric Allen Bell.
[ericallenbell.com] 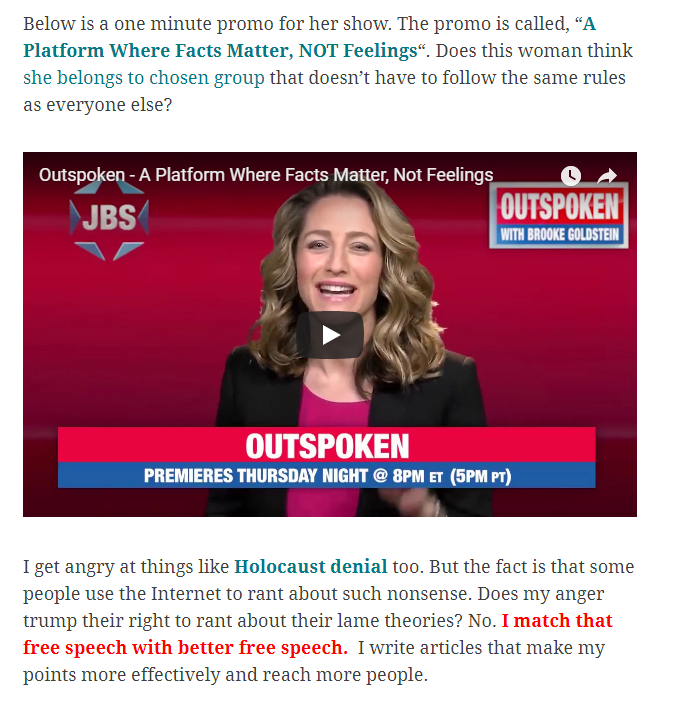 Quote
Eric Allen Bell
"Does this woman think she belongs to chosen group that doesn’t have to follow the same rules as everyone else?" - Eric Allen Jew Hater

Notice that he links to his article about Pamela Geller being a disloyal Jew! Then he starts talking about the Canaanites.

Quote
Eric Allen Bell
I mean, when “God” tells his people to go into the Promised Land, find the Canaanites and kill every man, woman and child (that’s right, slaughter babies) but to save the gold and silver – what do you do? But I digress… - Eric Allen Jew Hater

Eric Allen Bell has never written about Holocaust denial. His first foray into the subject is to take a principled stand in favor of Holocaust denial on the grounds of free speech.

But we have seen on this forum that he does not agree with free speech in principal. He wants this thread taken down, and has threatened legal action. He did not want to discuss the bounty, his treatment of Clark Banner, his fraudulent LinkedIn page, etc. He wanted that all shutdown. Now he is a defender of free speech concerning Holocaust denial?

EAB responds to the criticism he is receiving about this latest piece of writing, thusly,

Quote
Eric Allen Bell
I really am indifferent to the hate mail I'm getting, in my in box, for posting this story. Clearly no one who has called me "Antisemitic" has actually read the story, or at least bothered to scroll down and read the press release itself, sent out by a Jewish lobbyist group, demanding censorship. If one has been so deeply indoctrinated as to have an immediate knee jerk reaction, the moment they hear a certain word, that person is not free. One must have an inner revolution, within the self, questioning everything you have been taught, before you can truly have an original thought and even begin to experience an intellectual and spiritual freedom. - Eric Allen Bell
[www.facebook.com]

You can't warn people about Eric Allen Bell, they have to see it for themselves. That is what I have been doing, preserving, and drawing attention to his incredible record of public statements.
Attachments: indifferent to hate mail.PNG (21.9 KB)
Options: Reply•Quote
Re: Eric Allen Bell
Posted by: Eric Allen Bell ()
Date: July 16, 2018 09:15PM
From the EricAllenBell.com blog, dated April 17, 2017:


TO THOSE NEO NAZIS FILLING UP MY INBOX:

I do not share your views. Yes, I am critical of Israel, but I stand with Israel in fighting Islam. I’m very clear about that. I am a Nationalist but NOT a “White Nationalist” and welcome anyone and everyone who wants to fight to preserve and grow Western Civilization – and that includes Jews.

Nazism has nothing for me. I am suspect of those whose loyalty is to a foreign country first (Israel) but I do not paint all Jews with the same brush. Islam presents an existential threat to all civilized people. And I will fight alongside those whom I disagree with on other issues, to destroy Islam.

Nuclear armed Muslims are the defining issue of our time, with Neo-Marxists being a close second.

The self-described “legal arm of the pro-Israel community” a Jewish lobby, has issued “cease and desist” legal threats against Google, Twitter, and Yahoo, demanding that they censor content critical of Jews or face legal action. This according to a press release issued by the New York-based Lawfare Project – which on its website claims to be the “Legal Arm of the Pro-Israel Community”.

Well folks, I am very much in support of Israel. Israel is the first line of defense against fanatical Muslims, who are clearly the biggest threat to Western Civilization today, along with Cultural Marxism. So I am a part of the “Pro-Israel Community” big time. But, like I’m sure many who support Israel and/or the Jews, I find this legal action and double standard to be absolutely unacceptable.

You knew he couldn't stay away. He has to shutdown this thread, and is not a supporter of free speech.

One can look back on this thread and find Eric Allen Bell trying to get me fired for something he said that was anti-Semitic. Even by his own standards he makes over the top anti-Jewish statements.

Eric Allen Bell is Alt-Right that is the group associated with Richard Spencer, a Nazi.

If you have not already done so, please check out Eric Allen Bell’s own supporters rebelling over Eric’s relentless attacks on Jews. [www.loonwatch.com]

This is not me “painting” him as anti-Jewish. This is his own supporters telling him to back off.

Eric Allen Bell accuses Brooke Goldstein of being a woman who thinks, “ . . . she belongs to chosen group that doesn’t have to follow the same rules as everyone else”. The link he provides to support this assertion is to his piece attacking Pamela Geller for being Jewish.

Brooke Goldstein is trying to get YouTube, Facebook, and Twitter to comport with pre-established Spanish law regarding Holocaust denial, and anti-Semitic materials. Eric Allen Bell makes no discussion of this. Instead, he brings up the Canaanites to imply Jews are a genocidal group.

Eric Allen Bell’s article – “Jewish Organization Demands Internet Censorship or Face Legal Action” is not about freedom of speech. It is about Jews, and that he does not like them.

This is his right, of course. He is free to dislike whoever he chooses. But to try to get us to believe this is not what he is doing is the act of a delusional cult leader.